Declaration
Given the natural flexion/extension movement of the knee as a combination of rolling and sliding during the first 30° of flexion; subsequently the real flexion depends upon the position of the center of rotation.
This implies that there is a difference between the knee angle measured with a goniometric sytem and the real distance between the foot and the axis of rotation.

Hypothesis
After an initial circular rotating phase, the flexion/extension movement of the knee proceeds with a combination of rolling and sliding (rotary - traslational) motion, which is characterized by the progressive decrease of the distance between the starting rotation and the articular surface.

Provided that Ra is the first rotating radius that lies on the y axis, we could describe the gradual displacement of the axis of rotation of the knee, the trajectory of flexion and extension of the leg on the thigh can be analitically defined as:

according to α <30 °, the knee motion can be described as a rigid system that rotates around a fixed center: the trajectory performed by the point P is the equation of circumference

when Rb is the real (effective) radius of rotation changing with the mutation of α, when Rb < Ra.
When α is the angle between the x-axis and the radius of rotation, the values of x, X, y and Y can be obtained as:

So when a given value of α is included between 30° and 135° the position of the istantaneous center of rotation can be calculated as:

Pratical application – The new scale angle
As seen from above, it appears that the rolling and sliding motion the peripheral point P follows a curve with a spiral process, receding toward the center.
This implies that the scale for the evaluation of the actual angle of the knee must be established by the sequence of extreme points P of radius Ra, which second end (it initially overlaps with the origin of the reference xOy system) after 30° it moves along the x axis within a degree equal to ∆x
Therefore the angular reference information on the spiral curve  (Fig. 1) must be placed according to the new source xO'Y as a result of the instantaneus shift of the goniometric system along the x axis, when O'= O + ∆x, as a new instantaneus center of rotation. 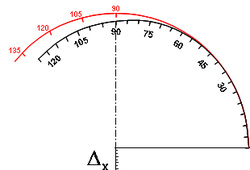