The importance of the support foot in deambulatory recovery
A proper deambulatory recovery has as its basis a proper proprioceptive systems strengthening that are activated only with the support of the foot on the ground, region of the body that trasmits the most information on the balance as the basis for a correct posture and the consequent control of the relationship between thigh/leg/foot. We can say that a limb with a stable postural balance, allows the development of an appropriate dynamic activity.
Mechanical aid of Ktj brace
Analyzing in more detail the step, we can break it down in a dynamic phase of ground contact and in an air phase.
In the dynamic phase of ground contact, the advantages of the Ktj device through pins junction , determine a weight discharge which burden on the knee greatly reducing (or even disappearing) pain in the support.
In the air phase, instead , the angle reached in the call leg on the anterior-posterior plane ( 45-50° ), guarantees the return of the instantaneous center of rotation (which does not happen using a fixed center brace).
Feed - Foward
Considering that the nervous system is able to perform movements already known (carried out automtically as deambulation), and to learn new movements to adapt to perform complex gestures, which are "designed " with the creation of brain representations of learning called engrams , that allow an anticipatory decision-making mechanism(feed- foward) with respect to behavior in motion that is being implemented.
On the basis of the above, we can understand how a wrong movement (lameness), if repeated over time,may lead to the strengthening of a deambulatory engram changed from the existing, so offsetting the fluidity of the walk bacause this will be acquired as correct and repeated (proposed) as reference model.
The device also determines immediate pain reduction and an  improvement of balance and of deambulation resulting in reduction of the risk of falls.
proprioceptive amplifier
The considerations listed above come from observations made on a population of elderly which with various degenerative diseases (chondropathies, arthritis, servevalgus, ecc.) , have immediately realized significant benefits recovering to deambulate quickly.
These benefits are attributable to both the mechanical support offerd by Ktj brace , and the proprioceptive recovery determined in first place from the support of the foot  "safer" and amplified by cutaneous sensory system.
As explained in more detail, proprioceptive system which chairs the postulate equilibrium, has as basis the nerve sensory references present in articular organs (Corpuscle of Ruffini - proximal joint capsule, Corpuscle of Pacini - Capsule, synovium and distal joints, Corpuscle and ligaments) that cooperate synergistically with the skin receptors of which also belong the spinal nerves that have a dual function : the posterior root (dermatome) develop the sensory/proprioceptive action while the front root (miomero) develop in motion action. 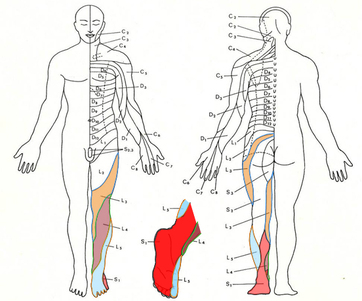 So we can understand how a possible imbalance recorded during deambulation inevitably produces pressure on sides that are "transmitted" from sidebars and "felt" by sensitive skin areas.
These pressures are transposed from the dermatome and immediately processed for a correction of the movement by the miomero.
The special motion of Ktj brace helps the sensitivity of perception of skin to be free from interferences determined by friction between brace and skin, due to the perfect parallelism between the mechanical motion of orthopedic and the roto - translational of the knee.
From the consideration that the use of the brace is recommended in case of injury to a joint (organ), inevitably accompained also by an injury to nervous/proprioceptive references, we can consider sensory/skin stimulation as a "proprioceptive amplifier" to replace the torn , to strengthen the possibility of a proper foot support with  the subsequent maintenance and improvement of postural balance.
The advantages for the elder
The deambulatory recovery of the elder is not only a form of autonomy , but also one more chance against loneliness and isolation . The possibility to return to deambulate creates a chain of benefits to the articulation itself, which is increasingly intensified when the movement becomes more quantitative.
The deambulatory recovery , in fact, brings benefits on strengthening of proprioceptive controls determined for the recovery of postular stability, on the muscolar system, and on that of major organ system (cardiac, circulatory and respiratory ) with a marked improvement in 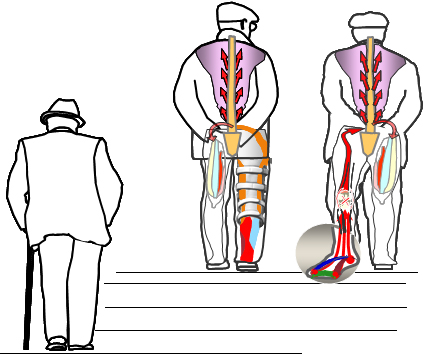