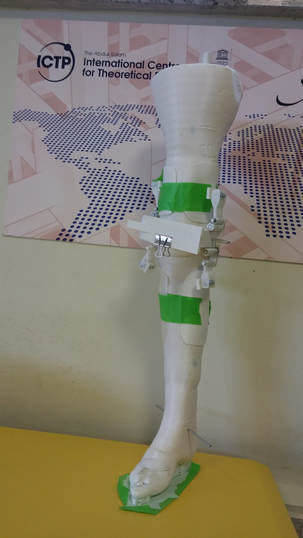 Introduction - The treatment for polio may require the use of a bi-articular brace to support the knee and the instep. This should match the kinematics of each joint and the axes of rotation of each mechanical device must be coaxial with the physiological ones.
Specifically, from a biomechanical point of view, we can assimilate the tibio-talar surfaces, to portions of spheres that glide between them pivoted around a single point situated in the "talar barycentre".
The mechanical device to support the knee, however, must have up to 30 ° a rotary motion pivoted on an initial center of rotation. From 30 ° the rotation is associated with a shift that is becoming increasingly important (1); in this phase the center of rotation continuously changes its position closer to the articular surfaces and is defined "instantaneous center of rotation".
This variation of positioning which, during the flexion-extension of the leg on the thigh, alters the distance between the center of rotation located on the femoral condyle and the "talar barycentre".
A mechanical device which is fixed to the knee, therefore, it must take into account the difference of "length" that the lower limb presents in the extended and flexed position.
If this does not happen the mechanical device will impose the movement (2) and the articular heads will be dragged on the mechanical trajectory which will tend to move them away creating internal tensions in the articulation (3) (fig. 2)
In the light of the above, a knee / ankle bi-articular brace must be designed respecting the following features:
1 - the mechanical device placed at the knee should play a roto-translational kinematics whose mechanical initial center of rotation must be aligned to the physiological one;
2 - the length of the bar to be placed at the side of the tibia must be defined in function of the distance existing between the "initial center of rotation" placed on the femoral condyle and the "talar barycentre ".
Material and Methods - A study on the dynamic localization of the center of rotation of the knee made by analyzing the trajectory of the leg relative to the thigh, it was created a roto-translational device with variable center of rotation (VRC)(1), which we wanted to verify the peculiarities inserting it properly, through tridimensional processing software, in a model of knee.
Taken separately two bone heads, one of femur and one tibia in digital format (.stl), through tridimensional scanning, the processing software was conducted by setting a graphic-mathematical procedure that involves:
- The positioning of each individual bone segment in the Cartesian plane in function of axes x, y, z, in order to create precise spatial references to determine the reference planes to insert the mechanical parts of the device to VRC;
- The identification on each femoral condyle (medial and lateral) of the initial center of rotation, as points of passage of the intercondiloideo axis around which develops the roto-translatory motion (Fig. 3).
Results - The individual elements femoral and tibial were made using 3D printing at the SCIFABLAB of the International Centre for Theoretical Physics (ICTP) of Miramare (Trieste) using low-cost 3D printers with FDM technology in PLA (polylactic acid) material, extruder diameter of 0.4 mm and a layer height of 0.1 mm.
The same were then assembled together for the verification of freedom of movement (fig. 4), or the possible presence of any conflicts between articular plans.
Determined that the movement took place without any hindrance, we moved to the measurement, through thick (0.1 mm), of the existing distances between the femoral condyle and relative tibial plateau to the various degrees of flexion (Table I).

Discussion - From the results it is clear that the movement between the articular heads set on finding the initial center of rotation located on the single condyle, does not create nor conflicts between the surfaces or removals greater than 0.2 mm. throughout the range of motion.
It seems, therefore, correct to say that the axis passing through the initial center of rotation of the VRC device is perfectly coaxial with that intercondiloideo. Consequently, the graph-mathematics procedure set to track it is reliable and useful for determining the distance between the "initial center of rotation" of the knee and the "talar barycenter" as precise mechanical references for designing the bars to be placed laterally to the tibia.

Conclusions - At the conclusion of what has been described so far it seems appropriate to point out that:
- The graphic-mathematical procedure which produces the location of the intercondilloideo axis, is based on the analysis of the individual femoral condyle graphic with resulting custom design of the tibial side bars;
- In the proximal part of the bar, at the knee, a variable center of rotation mechanical device should be placed.
In function of the latter, the study on the localization of the initial center of rotation was conducted, which may also correspond to the " absolute initial center of rotation".
Certainly we believe that the results achieved in the study offer technological advantages that currently can be exploited in the bi-articular brace as those used for polio patients, but also tri-articular (hip / knee / ankle) used in the exoskeletons in support of paraplegic patients .