16° Congresso Nazionale, Società Italiana di Artroscopia, Genova 2003
We wanted to assess the possible difference between the movement of the knee and the movement of the various brace joints normally used while dealing with knee traumas.
We based our remarks on the well known fact that the knee has a rotatory-translatory movement, as described by Smidt (1973), Fumagalli et al. (1977), Marinozzi and Pappalardo (1977), Kapandji (1977), Tittel (1979), Fleischmann and Line (1981), Nissel (1985), Insall (1986), Draganich et al. (1987), Yamaguchi and Zajac (1989), Melegatti (1997) and Steinbrück (1997).
The thigh is considered the starting point and the extended leg the 0° angle (Fig. 1). According to articular mechanics, during the first 25-30° flexion the knee has a pure rotatory movement (Fig. 2). From 25° on (Fig. 3, 4 and 5), the rotation is combined with a gliding (forward) movement of the femoral condyles on the tibial flat bone that becomes more and more progressive and prevailing.

MATERIALS AND METHODS
In our research we reconstructed flat plastic models of the knee reproducing the outlines of femur and tibia with the average dimensions of adult bones. We chose four different kind of knee support joints and fixed them on the flat models.

The photographic documentation
We took a series of pictures of each model at the following angles of flexion: 0°, 30°, 60°, 90°, 110°.
We put standard distance markers on all models to highlight the possible differences between the trajectory of the natural movement shown by the radiographies and the movement determined by each joint. 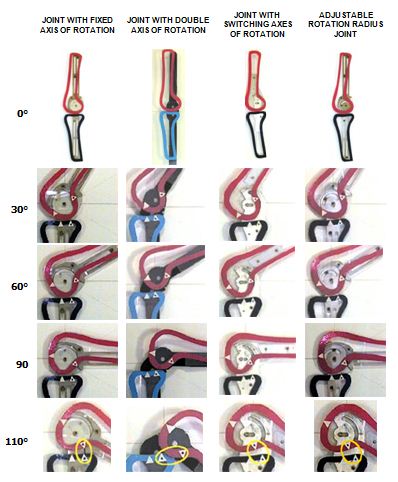 RADIOGRAPHIC COMPARISON
For a clearer comparison we traced the articular outlines of the models in the different positions and superimposed them to the respective radiographic outline (highlighted by the dark background).
CONCLUSIONS
Our research clearly shows that the knee has a rotatory-translatory movement. After 30° of knee flexion the femoral condyle glides progressively forward on the tibial flat bone. This movement should be reproduced by all equipments or mechanical joints guiding the movement of the knee for physiotherapeutic reasons.
If the knee is restrained by a mechanical articulation that does not reproduce this kind of movement, the head of the bones tend to follow the trajectory of the mechanical articulation. This deviation produces tension in articular elements like the ligaments, particularly the cruciate ligaments, the capsule, the menisci and the cartilages.

Our research shows that the joint that better reproduces a movement respecting the order of the phases of rotation and gliding is the adjustable rotation radius joint.
The leg and its mechanical support move on parallel trajectories to allow a perfectly correspondent contact between leg and mechanical disposal during the entire movement.
This avoids all traction of the mechanical disposal on the articular structures and the beginning of tensions within the knee.
These are the main points of the Annex 1 to the Italian Legislative Decree No. 46 of February 24th, 1997 on the essential and general requirements for EC certifications:
1. Disposals must be designed and constructed so as not to prejudice the patient's clinical state and safety or the user safety and health;
2. During the disposal design and construction the manufacturer must observe all the safety measures, up-to-date with the technological progress.